A downloadable game for Windows and macOS

The Robo-Lizards have taken over Crankville! Smashing shops, building huts, everything being in chaos.

Meanwhile, young adult Bileous isn't worrying about the Robo-Lizards. He's just living a life in exalted solitude, trying to be outside as little as possible, as if he's outside, then he's more likely to get a scar or two than get a small sunburn in summer. You see, Bileous is a social outcast. He messed up a VERY important meeting on accident, and that lowered his social currency into the negative thousands. So, there goes any chance AT ALL to be said "Hi" to or to be given anything more than dirt on his birthday.

But then, the Robo-Lizards put everyone in jail, except Bileous! (he's very protected from everything - even dust particles are eliminated from his house!!!) And then, Bileous knew how to win everybody's hearts. How to bring his social currency to the positives. He would have to... defeat the Robo-Lizards!!!

Unfortunately for Bileous, he couldn't by any protection because 1. everybody was imprisoned and 2. even if the armorer wasn't imprisoned, he couldn't buy anything from anybody in Crankville. So, he had to risk his life to do this - therefore, his life (whether he lived or not) was his social currency.

To blow up the control/production center for the robots, Bileous has to get five things: a key, a switch, a hijacker, a computer, and a wrench. They are scattered all around a map covered with Robo-Lizards - which are kind of hard to evade. But it will be worth it... if you can actually survive. Good luck, Bileous! :) Also, Robo-Huts spawn infinite numbers of Robo-Lizards. Fortunately for Bileous, if there are too many Robo-Lizards at once, then the system crashes and therefore some of the Robo-Lizards have to self-destruct to stabilize the system. 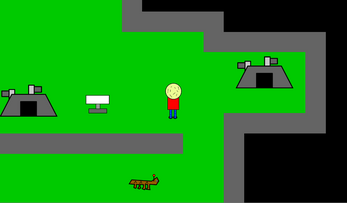